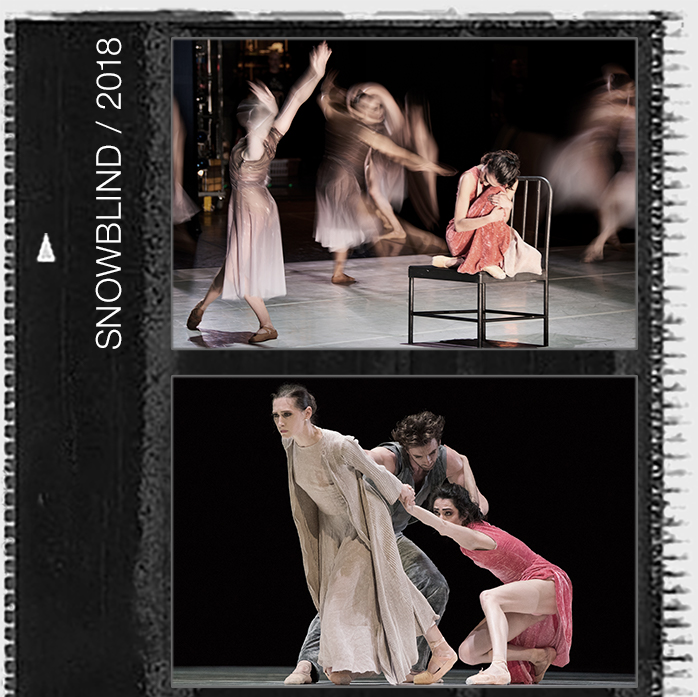 Premiere: 21st April 2018 for San Francisco Ballet, as part of their Unbound Festival of new works. Revivals planned by SFB in 2018/2019 in San Francisco and Washington.

Cast: 3 principals and a group of at least 10 dancers

In depth article about the work here.

"A smart choice for a one-act ballet... Marston whittles her material down to around 30 minutes of pure dance... There is a superb chemistry between casting and choreography…Marston keeps her language plain and functional when she needs to move her story along, but it blooms vividly when focusing on the characters’ inner lives…"
The Guardian

"Cathy Marston’s “Snowblind,” a distillation of Edith Wharton’s 1911 novel, “Ethan Frome,” gripped from first moment to last. No move seems uncharacterized in this tale of an ordinary farmer trapped between ailing wife Zeena and the alluring servant Mattie, all of it transpiring in a wintry American village. Marston, a British choreographer who should be better known in this country, evokes a hermetic world by using her 13-member corps as a snowstorm (all undulating arms) and then as censorious townspeople; and she employs deft physical strokes to vivify her three principals."
San Francisco Chronicle

"Marston’s lean dramatic interpretation of Edith Wharton’s novella Ethan Frome, gripped the audience so tightly that when the score abruptly vanished, the emotional tension help us in breathless suspension. Revealed solely through movement, the bitter tragedy of a farmer, his sickly wife and the housemaid who separates them remains vivid in my mind, as do the magnetic artists…who infused those characters with nuanced passion."
Dancing Times

"Of both programs, it was Cathy Marston, one of only two women among the 12 choreographers, whose “Snowblind” fearlessly bundled multiple idioms together in a rich sociological and poetic whole... The effect was timeless, and the chorus of exquisite forms expressing nature, the poignant sets and costumes, and the beautifully limned dancing of Sarah Van Patten, Ulrik Birkkjaer and Mathilde Froustey came together like an old master made for this moment."
San Francisco Examiner